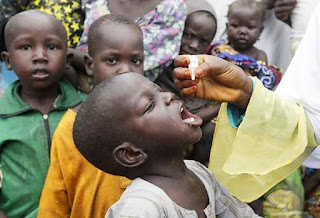 Principia Scientific is reporting that "This really should be one of the biggest scandals in public health, but it’s given little attention – mainly because of the high-profile nature of the people and organisations involved." The United Nations has been forced to admit that a major international vaccine initiative is actually causing the outbreak of the very disease it was supposed to wipe-out."

"While international organisations like the World Health Organization (WHO) will regular boast about supposedly ‘eradicating polio’ with vaccines, the opposite seems to be the case. Their decades-long campaign to eradicate polio is now killing scores of innocent young people living in poor countries. Now it seems that health officials are beginning to admit that their plan to stop ‘wild’ polio is backfiring, as scores children are being paralyzed a deadly strain of the pathogen derived from a live vaccine – causing a virulent of polio to spread."

Bill Gates is a bad man and the World Health Organization is a front for Communism.

Bonnie Henry has lost her mind but Theresa Tam is a f*cking idiot just like Anthony Fauci is.

I support America's Frontline Doctors. The fake science is a lie.

Children's Health Defense as well as the Guardian are confirming the vaccine report. The Scientist is reporting that it involved four countries in Africa: Nigeria, Democratic Republic of Congo, Central African Republic, and Angola.

ABC is also reporting that "Four African countries have reported new cases of polio linked to the oral vaccine, as global health numbers show there are now more children being paralyzed by viruses originating in vaccines than in the wild." Pakistan has also reported vaccine-derived polio cases.

In Kenya, Bill Gates and the WHO spiked a tetanus shot with with a sterilization drug called HCG.