Before I talk about Curtis Sliwa's candidacy for Mayor, I want to discuss the New York Attitude. What it was and what it can be as well as the political will that implemented the infamous New York crime reduction model that Bill de Blasio has destroyed just like Ed Koch before him.

In the song Empire State of Mind Jay Z states that "You can tell by my attitude that I am definitely from New York." I don't know what that means now but I certainly do know what that meant back in 1985. When I went to New York there was a colossal difference between the East Coast and the West Coast attitude in the US. East coast was much more aggressive while West coast was much more laid back. In New York it was all What's up?! While in California is was more like a stoner saying "What's happening man?" Tut would joke about it. When you Google the New York Attitude, the Urban dictionary doens't have a clue. This online post does.

Some online posts would ask why are New Yorkers so rude? Or at least why were they. The answer is they're not. They just don't have the time of day for bullsh*t. They are not superficial and will call someone out in a heartbeat. That doesn't mean they're rude, it means they're trustworthy. I had a friend from high school that went to law school in New York and became a partner in a large firm there. He said to me you wouldn't recognize New York now. They have graffiti proof trains and the streets are safe now. I was shocked. That was not the New York I knew. I couldn't comprehend what a graffiti proof train was.

New York subway graffiti was world famous. When I got there I was surprised at what I saw. I remember asking Lisa Evers about it. I said yo Lisa. New York Graffiti is world famous. We see murals on the outside of trains. Yet on the inside is all so random and chaotic. She was kinda irritated about it and say yeah, like it's the same guy doing it all. 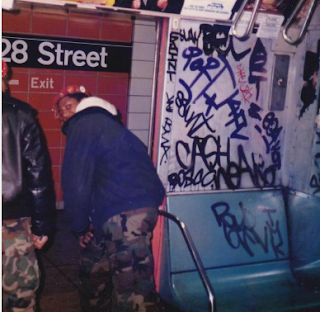 One time I was on the street and two crackheads started fighting each other with huge kitchen knives. I ran in and took one guy while Nick took the other. I yelled at my guy Don't move while he pointed to the other guy coming at him with a kitchen knife. I pointed at the other guy and yelled get over there. Big Nick instantly grabbed him and threw him against the wall. A couple of the smaller Latino guys rushed in and slapped the knife out of his hand.

I just shrugged my shoulders and said well that worked. Back home we would form a knife circle and do a takedown with a wrist lock. I kinda laughed and thought I can't argue that worked. When in Rome. I then turned towards my guy and stepped forward for the takedown.

After seeing what just happened he turned the knife around and handed it to me trembling. A street thug gets up in my grill and yells who do you think you are? Dirty Harry?! Yo bro you watch too much television. Without hesitation I yelled back, yo bro I don't own a TV. I went on to say, This is the City. This is not a zoo and that kind of conduct is not acceptable here. All the New Yorkers in the crowd agreed and said yeah! New Yorkers had the political will to implement the New York crime reduction model. That is why it was a success.

They can do it again if they elect Curtis Sliwa. If Curtis became mayor I can tell you exactly what will happen. Businesses will see hope and move back. Residents will see hope and start to care again. They'll feel empowered to make a difference and see it through until New York once again becomes an Oasis of Peace. Mark my word. We did it then, we can do it now. Yes we can.