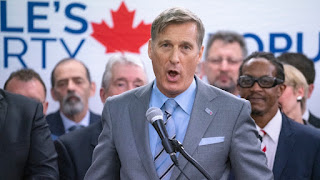 Last year, during the election campaign, we argued about getting rid of the Liberals’ $20-billion deficit. I said it could be done in two years. The Conservatives wanted to take at least five years. The Liberals and NDP did not even care to set a timeline.

Today, thanks to destructive lockdowns, $20 billion seems like a trifling sum. In July, former Finance Minister Bill Morneau indicated this year’s deficit would reach $343 billion. Since then, new estimates put it as high as $450 billion!!!

But that’s not all. In last week’s throne speech, the Liberals announced a whole series of new spending programs. With the help of Jagmeet Singh, Trudeau and his new Finance Minister Chrystia Freeland want to impose socialism on Canada.

This crisis is being deliberately exaggerated and used by the government to justify its power grab and massive spending. And don’t count on Erin O’Toole to denounce this. He’s terrified that the mainstream media will say he’s mean and not caring. And he’s too busy courting and splitting the Liberal vote.

Friend, I’m the only political leader in this country who’s been sounding the alarm about the catastrophic state of our public finances. The People’s Party is the only party that cares about our future and about FISCAL RESPONSIBILITY, not about buying votes.

As a PPC member or supporter, I know you share that goal too. Please give $4.50 today so we can offer Canadians an alternative to this socialist nightmare.