Communist China tells the world that it's time to decide: which side are you on?

China's side or India's?

I'm with India. RT if you are too. https://t.co/qTPsEC6rGn

- Falun Gong is a spiritual discipline that includes five peaceful slow-moving exercises. Its core teaching is centred on the principles of “Truth, Compassion and Tolerance”. People who practise Falun Gong conduct their life and behaviour in accordance with these principles;

- For over 21 years, China’s corrupt communist party officials have been orchestrating the torture and killing of large numbers of people who practice Falun Gong, especially for their vital organs for the profitable transplant industry in China on a massive scale;

- Canadian Citizen Ms. Sun Qian has been sentenced to eight years in prison and another eight Falun Gong practitioners with Canadian ties are suffering imprisonment in China with sentences of up to 16 years for their belief; and

We, the undersigned, citizens and residents of Canada, call upon the Government of Canada to deploy all legal sanctions, including the freezing of assets and the barring of entry to Canada, against, but not limited to these perpetrating corrupt officials: Jiang Zemin, Luo Gan, Liu Jing, Zhou Yongkang, Bo Xilai, Li Lanqing, Wu Guanzheng, Li Dongsheng, Qiang Wei, Huang Jiefu, Zheng Shusen, Wang lijun, Zhang Chaoying, and Jia Chunwang.

There was also a similar letter asking the Canadian government to invoke the Magnitsky Law against China for the human rights atrocities happening in Tibet, occupied East Turkestan (Xinjiang), and Hong Kong. That letter was signed by numerous organizations and Members of Parliament. Perhaps supporting those MPs in the next election will protect human rights and real social justice. Communism is a totalitarian state that abolishes human rights just like Fascism.

As we speak Communist China is still bullying India. Rebel Media has launched an online petition in support of India against their bully oppressors. Canada needs a Prime Minister that will stand up to bullies not fund them with borrowed money. Xi Jinping is a bad man. 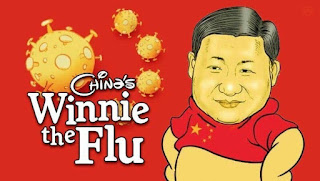