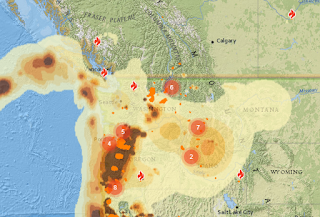 It's pretty smokey in Surrey this afternoon from the forest fires. I think it's coming up fro the US. The Surrey Leader is reporting that "A forecast modeling system shows just how much smoke is drifting from fires in Washington and Idaho over southern B.C. The Blue Sky Canada Smoke Forecasting System tracks and forecasts smoke as it drifts through air sheds, sparking enough of a concern for the government to release a Smokey Skies Bulletin on Sept. 8."

It was really noticeable driving over the Port Mann bridge into Vancouver. At lot of low hanging fog that wasn't fog, it was smoke. Vancovuer had patchy spots of fog but you could really notice the have over Coquitlam and surrey comin gback over the Port Mann. I assume the low smoke would mean a closer fire. Usually the higher smoke is from fires that are further away.

The California fires are devastating but there are also fires in Oregon and Washington as well. We've done better this year in BC with a wet July helping reduce the risk compared to previous summers where the high altitude smoke would turn the sun blood red.

The smoke is a lot worse going over the Golden Gate bridge in San Fransico.