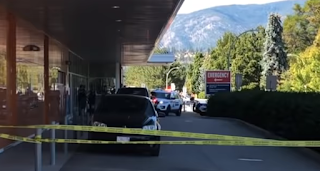 Castanet is reporting that "At roughly 12 p.m. Sunday a man with a gunshot wound showed up to Kelowna General Hospital with a dead man inside his vehicle."

"Police were told by the victim that the shooting happened in the McCulloch area, leading officers to close roads in the area Sunday and search for evidence. By Monday morning, police had mostly left the area, with the exception of a single unmarked RCMP vehicle on Pooley Road. Cpl. Jocelyn Noseworthy of the Kelowna RCMP said they have not linked Sunday’s shooting to one on Aug. 26 at the Ramada Hotel, where gunfire rang out just before 11 a.m. with a shooter targeting two men. Neither were hit, but one intended target was hurt while fleeing. Officers found an abandoned vehicle on Dilworth Mountain later that day that was suspected to be involved."

Update: Castanet is reporting that "The Kelowna RCMP has revealed the identity of the victim of Sunday’s homicide. Kelowna resident Cory Allan Patterson, 34, was found dead inside a vehicle at Kelowna General Hospital that had pulled up to the emergency department with the driver suffering from a gunshot wound. The driver of the vehicle, also a 34-year-old Kelowna man, is recovering from non-life threatening injuries."

In 2016 the Burnaby Now reported that Cory Allan Patterson was arrested on outstanding warrants after he was caught in a stolen vehicle. "The outstanding warrants against Patterson include kidnapping, assault with a weapon, uttering threats and two counts of breach of undertaking." In 2017 he had a matter before the New Westminster court which is covered by a publication ban.