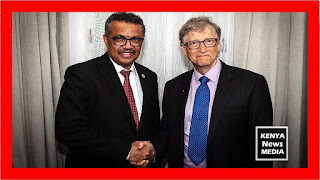 Why do the super rich fund Communist revolutions? I don't know. I don't understand it. I just know they do. I don't understand Bill Gates obsession with vaccines. His obsession is both psychotic and suspicious. In this Youtube video Bill Gates is teaming up with Tedros Adhanon. Ted's not a medical doctor he's a politician. He was a leader in a violent Communist paramilitary organization in Ethiopia before the Communist Party of China lobbied to have him become director the WHO.

So why is Bill Gates shaking hands with a violent Communist paramilitary and why is he funding them? Kenya is where the Communist led World Health Organisation spiked their tetanus shots with a sterilization drug called HCG - human chorionic gonadotropin.

In 2014 the Washington Post reported that "The Kenya Conference of Catholic Bishops and the Kenyan Health Ministry are locked in a heated battle over the safety of a tetanus vaccine that's being administered to women in the country. Although the government, UNICEF and the World Health Organization have all said that the vaccine is safe, the country's Catholic leaders say they have proof that the doses given to Kenyan women since March are "laced" with a fertility-inhibiting hormone. That accusation, which was made in a public statement last week, carried the signature of about two dozen Kenyan Catholic leaders, including Cardinal John Njue, the archbishop of Nairobi. The controversy has since been taken up by the Kenyan parliament."

This is why people don't trust Bill Gates or the World Health Organization.