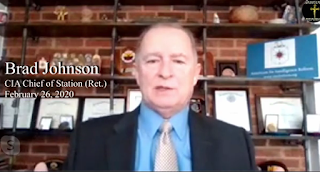 Update: Brad Johnson is a spin doctor for the CIA's criminal network. Cameron Ortis is innocent.

Although this is entirely possible, I am somewhat concerned with any intel coming out of the CIA since we now know they are a criminal organization whose mandate is murder to get gain. Lying is their MO. There currently exists three inherit problems within the CIA.

1) The CIA have been deeply involved with drug trafficking since the Vietnam War. Gary Webb was right. Iran contra never stopped. What the CIA did secretly in Vietnam they are now doing openly in Afghanistan. Libya did not murder Major Charles McKee, the CIA did.

2) The CIA were the inventors of Operation Northwoods and practice false flag attacks.

3) The CIA's control of the MSM has been promoting the damage caused by COVID-1984 in support of Joe Biden who is a globalist tied to Communist China.

If Cameron Ortis was a spy for Communist China, then that is a huge concern. However, it is not the only concern. The CIA's obsessive control of the MSM promoting globalism is the primary concern on the table. Globalism is Communism so the CIA's opposition to Communism is fake. They don't oppose Communism they simply want to take it over like the Rothschilds of old.

Justin Trudeau's public support of Communist China and their forced organ harvesting of political prisoners is a concern for everyone with a moral conscience. Justin Trudeau giving millions of tax dollars to the WHO to be laundered for Revolutionary Communism while he racks up record debt is a criminal act equivalent to treason. That is what we need to face.

Update: Last year global reported that "Sources told Global News that many RCMP members came under suspicion after highly sensitive operational police documents were found during an investigation of a Vancouver-based company. The documents turned up during police searches of Vincent Ramos, the CEO of Phantom Secure, a company that sold encrypted phones to transnational crime groups."

"Ramos’ company sold 20,000 phones to criminals worldwide so that they could conduct drug and money laundering transactions, and cartels were also using the phones for “planning hits,” according to sources. Although Ramos made tens of millions, he was seen as a low-level facilitator for the major criminals that used his service, sources said."

Since the CIA is the largest transnational drug trafficking network in the world, any smear campaign they conduct of potential whistleblowers is suspect.

He Was Canada’s ‘Clark Kent.’ Then Police Say He Went Rogue but did he?

"Those who knew Mr. Ortis said they were shocked to learn of the charges against him."

“The behavior he’s alleged to have engaged in would go against everything we ever saw of him,” said Chris Parry, a journalist who met Mr. Ortis while he was a graduate student. “This guy worked 15 years in the service of the country when he could easily have taken well-paid corporate positions at any time. Clark Kent is the best way to describe him,” he said. “In looks and physique, but also in terms of secrecy and genuine dedication to work for the public good.”

Sounds like a CIA set up to me. Ortis was working under cover. If he had posed as a drug dealer from Panama, that wouldn't mean he was corrupt. It meant he was under cover trying to uncover corruption. Sounds like he did. That's what got him on the CIA's hit list.

Instead they charged their own guy that supplied the encrypted blackberries and the Clark Kent that was ready to take down Larry Amero. Go figure. An evil tree cannot bring forth good fruit.

Posted by Dennis Watson at 2:20 PM