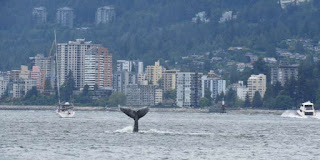 Global is reporting that "A B.C. researcher is urging boaters to exercise extreme caution after a young humpback whale turned up under the Lions Gate Bridge on Friday. Marine Education and Research Society co-founder Jackie Hildering says the whale has been identified as a one-year-old humpback nicknamed "Halfpipe" due to unique markings on its tail.

"The whale had been previously sighted feeding near Bowen Island on May 11, but researchers weren't able to identify it because its tail remained submerged. Humpbacks do not have biosonar -- the ability to use sound to map their environments -- the way orcas do, making them particularly vulnerable to ship strike, Hildering said. 'If they're feeding, they are feeding and they can be oblivious of boats,' she said."