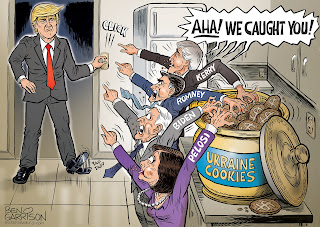 The Salt Lake Tribune is reporting that " Sen. Mitt Romney says a possible Senate investigation into a Ukrainian energy company with ties to Vice President Joe Biden 'appears political' and the Utah Republican could be a key vote in blocking the inquiry that surfaced among Republicans after Biden took the lead in the Democratic primaries." Oh the cunning plan of the evil one.

Breitbart is reporting that "Joseph Cofer Black, a national security adviser for the 2012 Mitt Romney campaign, sits on the board of directors of Burisma Holdings, the Ukrainian oil and gas giant that paid at times more than $83,000 per month to Hunter Biden, former Vice President Joe Biden’s youngest son." It's all part of Ukraine Gate and the China Syndrome.

The Federalist Papers reported that "Cofer Black left the CIA in 2006 (does anyone ever completely leave the CIA after being a spook?) to join Blackwater, the huge contractor for services related to military and intelligence action, where he served as vice chairman until 2008."

Paul Pelosi Jr. was an executive of a gas industry company, Viscoil, that did business in Ukraine – and his mother Nancy Pelosi was featured in one of the company’s promotional videos.

Mitt Romney wants to double Guantanamo. He does not support civil liberty and the US constitution. John McCain said we should not torture. He was right. We are better than that.

Inside the shady private equity firm run by Kerry and Biden’s kids: "In short, the Chinese government was literally funding a business that it co-owned along with the sons of two of America’s most powerful decision makers."

The Hill is reporting that "A private equity firm managed by the son of former Vice President Joe Biden struck a deal with China's state-owned bank in 2013 at the same time that Biden was in the country to meet with Chinese President Xi Jinping. Hunter Biden, who arrived in China aboard Air Force Two alongside the vice president and the rest of the U.S. delegation, was at the time in control of Rosemont Seneca Partners LLC., a private equity firm that would go on to strike a deal with the state-owned Bank of China to create a $1 billion joint investment fund."

Greg Palast: “Mitt Romney’s Bailout Bonanza: How He Made Millions from the Rescue of Detroit”

"Investigative reporter Greg Palast reveals how Republican presidential nominee Mitt Romney made some $15 million on the auto bailout and that three of Romney’s top donors made more than $4 billion for their hedge funds from the bailout."

"We turn now to Freeport, Illinois, where more people have been arrested protesting plans by Mitt Romney’s former company, Bain Capital, to shut the Sensata Technologies plant and move operations to China - a loss of 170 American jobs."

Greed and Debt: The True Story of Mitt Romney and Bain Capital

"And this is where we get to the hypocrisy at the heart of Mitt Romney. Everyone knows that he is fantastically rich, having scored great success, the legend goes, as a “turnaround specialist,” a shrewd financial operator who revived moribund companies as a high-priced consultant for a storied Wall Street private equity firm. But what most voters don’t know is the way Mitt Romney actually made his fortune: by borrowing vast sums of money that other people were forced to pay back. This is the plain, stark reality that has somehow eluded America’s top political journalists for two consecutive presidential campaigns: Mitt Romney is one of the greatest and most irresponsible debt creators of all time. In the past few decades, in fact, Romney has piled more debt onto more unsuspecting companies, written more gigantic checks that other people have to cover, than perhaps all but a handful of people on planet Earth."

"Latvia’s financial watchdog said on Friday it had fined Baltic International Bank 1.56 million euros ($1.72 million) for lax anti-money laundering controls. The Financial and Capital Market Commission (FCMC) said in a statement that a review of the country’s eighth-biggest bank had shown it did not have an adequate control system for the prevention of money laundering and terrorism financing. It is the latest in a string fines on Latvian banks by the FCMC as Latvia tries to clean up its financial sector after several scandals, including the closure of ABLV last year after U.S. authorities accused it of money laundering." Joseph Cofer Black is a Member of the Supervisory Board for Baltic International Bank and has been since Nov 1 2016.

"The former CEO of Danske Bank in Estonia, Aivar Rehe, a bank known for money laundering during the years Obama and Biden were in office, was found dead in his yard. He was a witness for the prosecution in a $220 BILLION money laundering scandal involving transfers to Latvia."

"It appears that Romney, Kerry, Biden, McCain, Pelosi, Clinton, Mueller, and Schiff all have ties to Ukrainian firms. V.P. Biden bragged on camera that he was able to force the former Ukraine President to fire a prosecutor who was investigating his son, Hunter, by threatening to withhold $1 BILLION in U.S. loans from Ukraine – all with approval from Obama."

Posted by Dennis Watson at 3:35 PM