Firearms lost by and stolen from the police 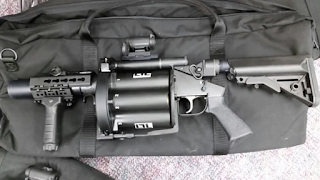 That's kinda like how the RCMP's terrorist task force *lost* a billion dollars from their budget. That is organized crime. If someone who worked in a bank lost a billion dollars, they'd be fired and go to jail. In 2017 the CBC reported that "RCMP are thanking the public after recovering a lost gun and ammunition that may have fallen from an officer's truck Sunday near the Golden Ears Bridge. They were looking for a 40MM Abrams Airborne Mfg Inc. Less Lethal Multi-Launcher, which a release calls a "gas gun," along with a green camouflage bag containing ammunition. The gun and ammunition went missing Sunday, and the B.C. RCMP said in a statement it believed they fell out of "the insecure back hatch of a truck canopy," shortly before 7:30 a.m. PT on Sunday."