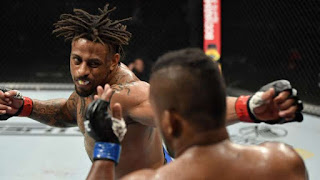 Glad to see thigns are getting back to normal. UFC 249: Ferguson vs. Gaethje was a mixed martial arts event produced by the Ultimate Fighting Championship that took place on May 9, 2020 at VyStar Veterans Memorial Arena in Jacksonville, Florida, United States.

Greg Hardy is an Ex-NFL player turned MMA. That fight is on Youtube.