Kim Jong-un is alive and well 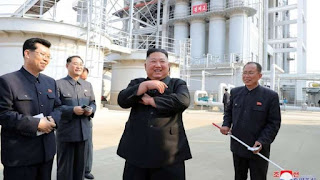 BBC is reporting that "North Korean leader Kim Jong-un has appeared at a fertiliser factory, looking remarkably cheerful for a man killed off by rumor and some of the world's media last week." CNN Fake News Network started the false rumor just to create controversy. CNN and CBS are worthless. Find alternate news sources. Cuba and North Korea are not as bad as China.