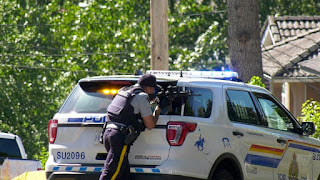 CBC is reporting that "Surrey RCMP have arrested four people after a shooting in the Bridgeview area of Surrey on Monday afternoon. According to a written statement from police, officers responded to reports of shots fired coming from a residence in the 12900-block of 111 Avenue at around 3:30 p.m. on Monday. Police said they contained the residence and arrested those inside. They said no one was injured as a result of the shooting, but one person was taken to hospital with a non-life threatening arm injury, believed to have been sustained during an altercation inside the residence. This residence is known to police, who say the shooting was a result of a dispute between parties who know each other. The public is not believed to be at risk."

Bridgeview is a toilet. The residence is known to the police. No doubt.

Update: The Surrey Now Leader is reporting that "A 54-year-old Surrey man is facing charges after a shooting in Bridgeview on Victoria Day, police say. Surrey RCMP say Clinton Gascho has been charged with assault with a weapon and assault causing bodily harm in what was the city’s 11th “shots fired” case of the year."