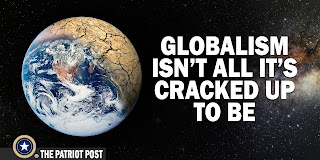 First I'll rewind then move forward. In Laura Hollis' article last year she states "We don’t want globalist government. When I say we, I don’t just mean conservatives, or even Americans. I mean most people around the world." Indeed.

"It’s arguable that much of the conflict we see across the planet is attributable to the efforts of a handful of people to foist their worldview on everyone else, and the everyone elses starting to push back. Hong Kong’s citizens are resisting efforts by the Chinese Communist government to take away the rights and freedoms they enjoyed while Hong Kong was a British possession."

"People want to be free to lives their lives, and - for the most part - to be left alone to care for their families, educate their children, perform their job responsibilities and go about the business of their daily lives. They don’t want to be cogs in a globalist wheel, told what to do by some distant faceless government bureaucrat enforcing regulations enacted to achieve policy goals grounded in questionable facts. That viewpoint is anathema to the globalists among us."

"Globalists think that the answer to every human problem lies in government - and the bigger the government, the better. Why stop at federal legislation and federal courts when you can push for international legislation and international courts? Not only does this remove the Average Joe’s control over his own life but also it creates the potential for so much delicious power."

"Here in our own country, Hillary Clinton is Exhibit A. Clinton cannot let go of 2016. She cannot bear the loss, not only because of her immense ego but because She. Had. Big. Plans. In Clinton’s worldview, only a handful of people are brilliant enough to rule the world - she’s one of them. If the little people dare to want to run their own lives, they’re deplorables.”

Hillary Clinton and the CIA are Globalists but so is Joe Biden and Mitt Romney. Romney is part of the Bush Clinton fraud. The Republican Globalists and the Democrat Globalists are teaming up to rule their parties until they become one party, the Communist Party of China.

In her more recent article, Laura Hollis explains how "The Press Is a Threat to the Country." It is because the press is no longer free. The Press is controlled and Oppresses any and all opposition to their Globalist world view. "The press is disbelieved - and even loathed - because it has lost its credibility. You want to know why Americans don’t trust you? Because you’re arrogant. You’re condescending. You’re corrupt. You’re hypocritical. You’re shockingly ignorant. You’re pawns in a much bigger game, and your refusal to hold ALL powerful people to account is malfeasance that puts the country at risk. And not just from coronavirus." 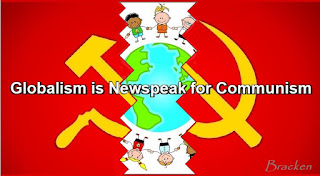