Doug Ford has lost his mind 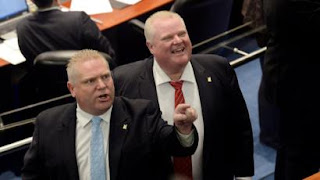 The Canadian Communist News Network was quick to run articles about how Doug Ford called lockdown protesters in Ontario a bunch of Yahoos. That is bizarre. Doug Ford and his brother Rob were the Yahoo. Rob Ford was an abusive drunk and a crack addict.

The protesters in Ontario held signs that said Freedom over Fear, End the Lockdown, The cure is worse then the disease. They were not a bunch of Yahoos. These were hard working concerned citizens who cared about freedom and the economic damage a civil liberty lockdown creates on families. Even DR Phil agreed with that.

Doug Ford stated he objected to the fact that some of the protesters were displaying Canadian flags upside down and said that was disrespectful. That's because he does not understand that displaying a flag upside down in an emergency is a distress symbol like SOS.

I don't fly the flag upside down myself but I understand their intent. The draconian lockdown in response to COVID-1984 is a wake up call to everyone who cares about their country and cares about civil liberty. The media is f*cked. Our media is f*cked. The bizarre nature in which COVID-1984 has been misrepresented by the media has been criminally insane.

The media has been determined to create mass panic and extend economic damage of the pandemic started by the Wuhan lab. It was launched right after Bill Gates coronavirus patent was approved in Europe. Bill Gates' Kenya con validates vaccine hesitancy.

The criminally insane coverage of COVID-1984 by the mainstream media is evidence of Communist China's expanding influence over Western media.

The Canadian Communist News Network was quick to report that Doug Ford made a recent plea for people to get tested. Give the government your DNA? Take a contaminated test? Download an intrusive ap that tracks everything you say and do? I think not.

The media was quick to emphasize how someone mistakenly referred to Doug Ford as Prime Minister instead of Premier and he said not yet. Just like Jason Kenny, that is what he aspires to. Yet in BC we have more civil liberty during COVID with a NDP government then in Alberta with a Conservative government. That's because Neo Cons are not Conservatives, they are new con artists. They talk the talk but they do not walk the walk. Jason Kenny's ties to Communist China are just as much of a concern as Justin Trudeau's. Just like Mitch McConnell and Joe Biden.