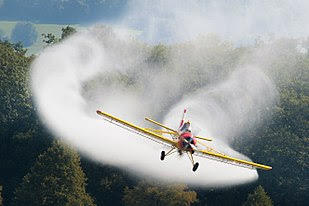 They were doing some more of that agent orange pesticide aerial spraying in Surrey today for gypsy moths. The plane started dive bombing over our house at 5:20 AM. Last year they told us the gypsy moth pesticide was not toxic for humans despite the fact that it kills all caterpillars, moths and butterflies not just gypsy moths. After they said that the health ministered warned us what days they were spraying so people with asthma or breathing problems could stay inside.

People then asked why they should stay inside if it was not toxic for humans. The health minister then said that it's not incredibly toxic for humans but breathing any foreign substance isn't good for you so they issued the warning as a precaution. There is a big difference between safe and not incredibly toxic. Now they simply stopped warning us what days they are spraying.

How do we know Bill Gates isn't spiking it with his fertility vaccine from Kenya? We will never know. Aerial spraying of pesticide is not healthy. The individual gypsy moth traps are more effective and less harmful and only affects gypsy moths not everything else under the sun.