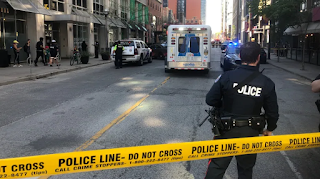 CBC is reporting that "A man is dead, a teen boy and a woman who was an innocent bystander are seriously injured after a "targeted" shooting in downtown Toronto on Tuesday afternoon, police say. The man, 21, was pronounced dead in hospital, according to Const. Alex Li, spokesperson for the Toronto Police Service. His name has not been released. The boy, 15, and the woman, 27, are listed in serious condition and expected to recover."

"The shooting happened in the area of King Street West and Peter Street. Police were called to the area at about 4:10 p.m. Officers recovered a weapon at the scene, police say."

It was a throw away - a non registered firearm.

The shooter got out on the passenger side of the blue vehicle, Saunders said. The victims ran southbound as they were being fired upon. The victim's vehicle was not left at the scene.