A tribute to Nelson Mandela and a Warning to the World 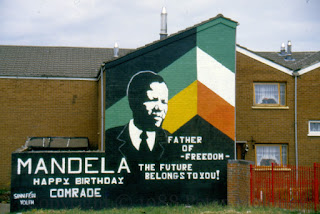 Since Nelson Mandela's grandson has been recruited to sell the UN's New World Order I will cite his grandfather's noble legacy and explain the difference between what Nelson Mandela sought and what the Communist party of China seeks. This will stand as a warning to the world so it will.

When I was in West Belfast back in the /80's I remember seeing this mural riding past in a black taxi. "Mandela, Happy Birthday Comrade. The future belongs to you." This was when Nelson Mandela was still in prison. After he was released from prison and became president they made a new mural for him which said "In my country we go to prison first, then we become President."

Although Wikipedia claims Nelson Mandela was an African nationalist and socialist, it also claims he had exhibited a commitment to the values of democracy and human rights including free speech which simply does not exist within Communism.

South Africa history Online states that "Two years after the first democratic election (1994) the President of the Republic of South Africa, Nelson Mandela, signed the final draft of the constitution into law at Sharpeville, Vereeniging on 10 December 1996. The date on which the constitution was signed marked International Human Rights Day."

Human rights do not exist within Communism. Nelson Mandela believed in the same thing James Connolly believed in. That true social justice can only exist within the framework of a free republic where civil liberty and human rights are protected by law in a Constitution not thrown away in a Manifesto. The divine eloquence of the Preamble to the South African Constitution is heart warming. The Preamble states "We therefore, through our freely elected representatives, adopt this Constitution as the supreme law of the Republic so as to:"

"­Heal the divisions of the past and establish a society based on democratic values, social justice and fundamental human rights; Lay the foundations for a democratic and open society in which government is based on the will of the people and every citizen is equally protected by law; Improve the quality of life of all citizens and free the potential of each person;"

The last line reflects Mandela's dream of social justice. Likewise you can see James Connolly's dream stated within the Irish Proclamation in the line that reads "The Republic guarantees religious and civil liberty, equal rights and equal opportunities to all its citizens, and declares its resolve to pursue the happiness and prosperity of the whole nation and of all its parts, cherishing all of the children of the nation equally, and oblivious of the differences carefully fostered by an alien Government, which have divided a minority from the majority in the past."

Let's compare South Africa to Poland after World War II and heed Winston Churchill's warning. Poland was invaded by the Nazis. Hitler used false flag attacks to justify an invasion of Poland. Stalin told the Polish resistance to launch an attack against Hitler from within and he would attack from without so they could "liberate" Poland from Nazi occupation.

The Polish resistance attacked while Stalin stood back and waited. He waited until the Polish resistance had been decimated before he launched his attack so that once he conquered the Nazis, Poland would have no resistance left to oppose his dictatorship. From Fascism to Communism Poland was conned into becoming slaves of a totalitarian state.

Likewise South Africa has overcome the oppression of Apartheid only to be led into bondage by the lies of Communism. Bill Gates, China and the UN have launched an attack on Africa. They want to make Africa slaves again and they will lie to everyone they can to accomplish that goal.

This is why South Africa's Constitution is under attack. They want to do away with human rights and make Africans slaves again. Only not just Africa, the entire world. Nelson Mandela and James Connolly were right. True Social Justice can only exist within the framework of a free republic where civil liberty and human rights are protected by law in a Constitution. The Bill of Rights within South Africa's Constitution is a noble model for the world to follow not forsake. 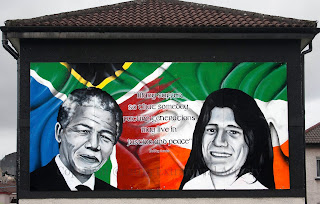 Just remember what the hammer and sickle represents. The hammer represents how the first thing Communism does is it crushes civil liberty and human rights. First they take away your guns. Then they take away your right to free speech, lawful assemble, due process, the right to legal counsel in a fair and speedy trial. Protection from unnecessary searches and seizures. Protection from being unlawfully detained without a charge. Communism crushes all these rights. 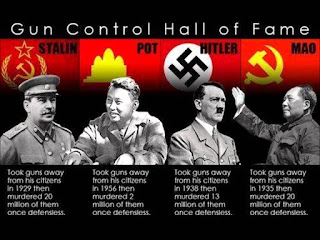