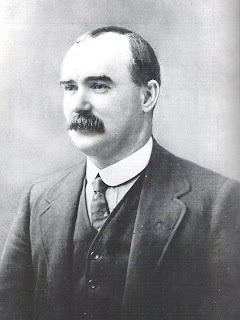 Many years ago when I was in West Belfast, a friend gave me a pin of James Connolly. Not knowing the local history, I thanked her sincerely and said who is that? She smiled and with a twinkle in her eye said, he was an Irish rebel. He was a Communist. I thoughtfully nodded, cherishing the gift and resolved to read up on this Irish rebel.

Aside from being a Socialist, James Connolly was one of the signers of the Irish Proclamation which was very similar to the American Declaration of Independence promising to protect equality, free speech, freedom of religion and civil liberty. Most would see that as a direct contradiction to his claim of being a Socialist.

It reminds me of a friend who used to think I was a Communist for the same reason I thought he wasn’t – we both believed in democracy and free speech. I thought that was somewhat ironic.

On another occasion I spoke with a National leader of a Canadian Trade Union who also claimed to be a Communist. Knowing my passion for democracy and my concerns about the revolution in Cuba he said to me, the Communists in Russia, China and Eastern Europe call themselves Communists but they aren’t really Communists. I said to him yeah, well what the hell are they because that is what Communism is. I was referring to the oppressive slavery that resulted in the death camps and the machine guns pointed inward on the East side of the Berlin Wall.

My father used to say that Communism works in theory but not in practice. Clearly wherever Communism has been portrayed, civil liberty has been lost and it has become the oppressive slave driver it originally set out to abolish.

In my opinion, James Connolly’s pledge is the reason why Communism never works outside a Free Republic. If you want to oppose slavery then you protect civil liberty. If you want to promote collective rights, you do so by protecting individual rights. The end does not justify the means. If you want to create a democratic socialist sate, you need to protect democracy. It's that simple.

My union friend used to claim that Cuba was the best model of Communism we have. I shook my head in amazement. No it’s not. Cuba has political prisoners of conscience. Sure it’s watered down Communism in that people are allowed to have a religion, but they only allow one political party on the ballot and you can’t be a member of that political party and run for a position in government if you have a religious affiliation. That is discrimination and is not a democracy.

In response I said the best model of Socialism we have is the Kibbutz movement in Israel where people are free to come and go as they please. It is based on a democratic system. In my opinion that is the only condition where socialism can properly exist. Where people are free to join or leave and democracy is protected by law.

When push comes to shove I agree with the Beatles in their song Revolution. You say you want a revolution Well, you know We all want to change the world But when you talk about destruction Don't you know that you can count me out. You ask me for a contribution But if you want money For people with minds that hate All I can tell is brother you have to wait. But if you go carrying pictures of chairman Mao You ain't going to make it with anyone any how.

China Red Square, East Berlin and Stalin’s death camps are all what I oppose. Yet James Connolly’s free republic I completely support. If he wants to create nationalized oil and public banks within a free republic based on democracy and the will of the people then have at it. Just don’t start denying private ownership of land and forcing public ownership of everything without making it publically accountable. Otherwise you just go from one rich elite to another.

In the famous musical Fiddler on the Roof, the young university student that wanted to marry the guy’s daughter appears to be involved in the demonstrations that gave rise to the Communist Revolution in Russia. Which has to make you wonder how many Jews supported that revolution. Not just the Rothschild’s, the average worker. Somewhat ironic since after Lenin high jacked the trade union movement in Russia he executed the striking trade unionists and killed more Jews than Hitler. The families of the striking trade unionists were too afraid to even collect their dead. Historically people have been conned to support a revolution opposing one great evil only to be taken over by a worse evil. That is why we need to protect civil liberty and a free Republic.

Posted by Dennis Watson at 8:18 AM