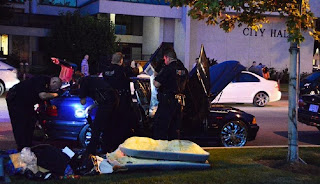 Well it looks like the new police chief in Kelowna is keeping his word about keeping the heat on gang members in town this summer. The Kelowna Now is reporting that Police Strip Car In Front of City Hall And Find 'Significant" Amount of Drugs.

The RCMP had received a complaint regarding a custom BMW about suspected drug activity. Members of the CFSEU located the vehicle outside City Hall on Friday and arrested the occupants for possession of a controlled substance. After searching the vehicle, a significant amount of drugs were discovered. Three cheers for the CFSEU and for the concerned citizens of Kelowna who called it in. Now that’s what I’m talking about.

We remember last summer the police did an amazing job busting up a major drug ring and car theft ring tied to the Hells Angels in Kelowna. Only rats sell crack and steal cars. If ya get jammed up don’t mention my name. B*tch.