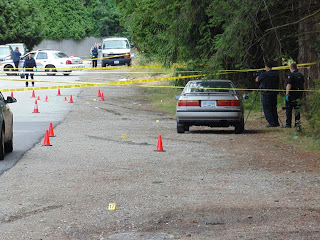 OK OK… back to the gang war. Two blog readers sent in links to the Twitter feed about police on scene in another Surrey Shooting at 126th Street and 59th avenue off Highway number 10 so I went over to get some pictures. Not that I don’t have anything better to do on the long weekend.

Global was on scene and is reporting that two male victims are in hospital after police received reports of gunfire exchanged between two cars in the 5800-block of 126th Street at around 2:45 PM. One of the males is in critical condition and the other suffered minor injuries.

CBC is reporting that Surrey Memorial hospital emergency was in lockdown and closed to visitors after the two shooting victims turned up at the hospital. There were 17 yellow markers on the road. Assuming those represent shell casings. It appears several shots were exchanged. 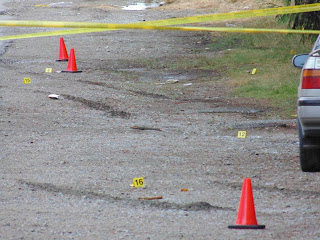 Locals said that a lot of people smoke dope at the park there. I pointed out that nobody cares if anyone smokes dope. Not enough to shoot someone over. They also said drug deals were done there frequently since it’s beside a park and close to highway number 10. One witness even said they saw a drug deal go down right in front of the police there and the police didn’t do anything about it. I guess that would depend on what else they were selling. They will shoot you over crack. One would hate to think they shot a rival pot dealer but stranger things have happened. 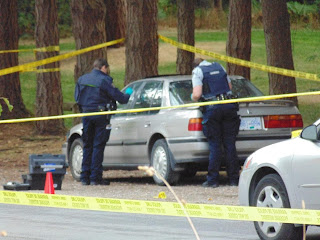 Update: Kim Bolan is reporting that the guy seriously wounded in the shooting is the stepson of murdered gangster Sandip Duhre. Which once again shows that the Hells Angels extermination of their drug dealing rivals is continuing. Glad Bill Fordy met with them and says everything is A OK.