Defending the Constitution and the Charter of Rights 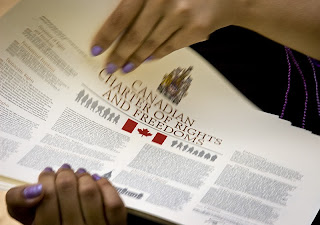 Lots more news to catch up on. The breaking news is the fact that Don Lyons just had his bail revoked because he has been accused of assaulting his girlfriend. Big surprise there. That and the Edmonton cocaine bust tied to the Hells Angels that the local media hasn’t seemed to have picked up on yet. Before I get down and dirty on the new news I wanted to make two philosophical posts because they are important and relevant.

Even though most of us are rightly concerned about the drug related violence that is plaguing our community, none of that is reason to give up our civil liberty. Especially when we see who it is that’s ultimately the driving force behind the drug related violence. I’m not talking about the Hells Angels this time. I’m talking even further up the food chain. We all know locally the drug violence leads either to the Hells Angels or a drug dealing rival they are fighting with. I’m talking about who benefits from their business. The ones that benefited from Freeway Ricky’s business in LA without his knowledge.

First I want to address the Constitution. The US Constitution has been a blue print for democracy around the world. The Irish Proclamation is similar to the US Declaration of Independence. The Canadian Charter of Rights is very similar to the US Bill of Rights. All of these important documents need to be preserved and protected because they are currently under attack.

Stephen Harper is an enemy of the Charter of Rights. At first I thought he supported those rights but just didn’t like the fact that it was Pierre Trudeau, his arch enemy, that finally entrenched it into law that would bind subsequent governments. Now I realize Harper's hate of the charter goes much deeper than that.

One article even had the audacity to claim Harper opposed the Charter of Rights because Quebec never signed on to it. What a joke that is. Harper doesn’t give a rat’s ass about Quebec. Saying he doesn’t support the Charter because Quebec never signed the constitution is absurd. Quebec didn’t want to be a part of England and swear allegiance to the crown. They totally support the civil liberties in the Charter of Rights. Ever heard of the French Revolution?

The French Revolution was founded on three principles: Liberty, Equality and Fraternity. In fact, the real motto was Liberté, Egalité, Fraternité ou la Mort. Liberty or death so to speak. Just like Thomas Paine's declaration.

People try and translate Fraternity to something else trying to make it more politically correct but in doing so it loses in the translation. The French symbol for Liberty is a woman. Fraternity does not exclude women. It’s a bond within a common struggle. Some people say Solidarity now but for many that term raises the hair on the back of their necks because of it’s socialist leanings and often for it’s political hypocrisy by those who shout the word the loudest. I prefer the term Fraternity which in no means excludes woman.

My point is, Quebecors clearly support the principles within the Charter of Rights. It’s England and the crown they have a problem with not liberty. The Statue of Liberty was a gift from France.

Stephen Harper opposes the Charter of Rights because it protects civil liberty. That is what he has a problem with it and that is why he continues to violate it on a regular basis. Sadly he isn’t the only one. Justin Trudeau had the audacity to claim that the NDP were lukewarm on the charter when he voted with Harper for a bill that violated the Charter and was illegal. It was the NDP, the Bloc and the Green Party that voted to defend the Charter not Justin Trudeau shockingly enough.

Likewise the Constitution in the US is under serious attack by the same government officials who swore and oath to defend it. One of the most offensive things Keith Alexander said when he was being heckled in Las Vegas, other than pretending he wasn’t a liar was his pretending he supported the constitution. That was another bold faced lie that needs to be addressed.

One of the hecklers said Read the Constitution. He answered with I have, you should. That was absurd and offensive. The Constitution is all about protecting civil liberty. It’s all about protection from unnecessary searches and seizures. It’s all about the right to a fair trial, to legal representation. Someone has to be charged with an offence before they can be arrested. These are the fundamental rights they are violating on a daily basis. That needs to be addressed. We need to be familiar with the civil liberties protected by the Constitution and the Charter of Rights so the next time some snake oil salesman like Keith Alexander or Sarah Palin pretends to support the Constitution we will see through their lies and know otherwise.

Order a free copy of the Canadian Charter of Rights

You can order a free copy of the Canadian Charter of Rights from the Human Rights Department of Canadian Heritage by filling out this form and E-mailing it to droits-rights@pch.gc.ca of by faxing it to: 819 994 5252. The Charter is available in two sizes, in poster (18" x 23") or certificate (11" x 14") size. There is no charge. Every home in Canada should have one on their wall. Stephen Harper won't celebrate the 30th anniversary of the charter but we can and should.