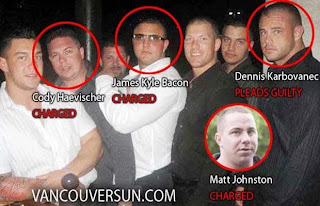 CTV is reporting that one of the Surrey Six trials has been moved from New Westminster to Vancouver next month. The one without Jamie Bacon. The one involving Cody Rae Haevischer, Mathew Johnston and Quang Vinh Thang Le. Perhaps they didn’t like the picket signs in New West. Like we haven’t picketed Vancouver courts before.

Nevertheless, as I previously said, since there are so many overlapping cases involving the Surrey Six going on at once I don’t see the publication ban being lifted until it’s all over so I won’t be covering it. I don’t want to do anything to screw it up. I don’t care who IHIT slept with. Getting some accountability for that horrific murder is paramount.

I do encourage people to attend the trial though. If the public and the press don’t attend the trial they won’t know what to report when the publication ban is finally lifted. That trial is going to be long and tedious and I don’t have the time to cover it. It would be nice to shake Anton’s hand.

I think Sophon Sek is being tried separately as well. The whole thing is one big mess. Wasn’t Mathew Johnston the one that kicked Robert Thomas’ ass in prison? That was rather surprising. I guess he was able to collect from Team Bryce for that one. Who knows, maybe Thomas took a dive and split the reward money with him. Team Giles always does the creep.