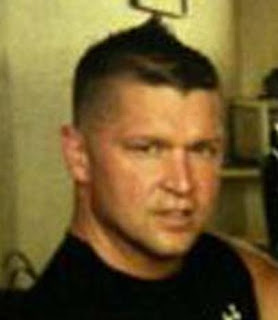 OK folks, here it is. The moment we’ve all been waiting for. The other day I’m reading the paper and I see an article about a gang member having his parole revoked because he has been charged with assaulting his girlfriend. Then I read it’s Don Lyons and I’m like whoa, I know that name. He’s from Kelowna.

He was convicted of trafficking cocaine for the Hells Angels along with Lester Jones the former Kelowna vice president. Which reinstalls my premise that the Independent solders work for the Hells Angels just like the new Red Scorpions do. After the Bacon brothers took them over and turned them into the Red Lobsters. Larry Amero was tied to Jonathon Bacon as well as Randy Naicker showing the Hells Angels control of both puppet clubs.

Larry Amero wasn’t acting on his own. He was on official business of the white rock chapter. That’s why they sent him on official business to Montreal. Now Larry Amero is with the surrey girl chapter. Which is rather amusing since he’s not from surrey he’s from Langley. He started taking steroid because he was beat up in high school. Walnut Grove. How lame is that?

BTW we all know Randy Jones from the Whiterock chapter, now overseeing the business for the Surrey Girl chapter, owned Tbarz for the club not his brother or mother. We all know the name change of that strip bar is a scam because they don’t want it seized by the US in that cross border indictment where Tbarz was considered the hub of a huge cross border drug ring tied to the Hells Angels.

So if Shakerz isn’t owned by Randy Jones and the Hells Angels any more what are those three Harleys doing parked out front right outside the front door last night where Tbarz had a sign saying bike parking only. If Bill Fordy really cared about crime in Surrey he’d check it out. But he doesn’t so he won’t. He just wants to posture for a political position like Fastbender over.

OK so back to Don Lyons. After doing time for drug trafficking on behalf of the Hells Angels, his parole gets revoked because he was charged with assaulting his girlfriend. Selling crack and now an accused woman beater. You cant get any lower than that.

What’s worse is that one of his family members is accused of trying to get the victim to change her story. Reminds me a lot of Donny McWhirter. Another fro ho woman beating loser connected to the Independent Soldiers in Kelowna. Maybe beating up your girlfriend and getting a stupid looking haircut are new initiation rituals for the group of dirt bags.

Here’s a fact for ya: “He who loves his wife, loves himself.” Guys who beat woman have a bad self image. They have no self respect despite their arrogant facade. That sad thing is, they can never build a healthy self image by mistreating their spouse. It’s a self defeating process that spirals down the toilet of misery.

Interesting to note in the Lester Jones drug conviction is that case was tied to three chapters of the Hells Angels. He was the former vice president of the Kelowna chapter drug trafficking in Winnipeg for the Calgary chapter. The police agent bought two kilos of cocaine off Lester in Calgary and left $72,000 in cash for the drugs at the Calgary clubhouse. I guess Randy Irons doesn’t sell crack but his clubhouse does.

Since Lester was the former vice president of the Kelowna chapter, we all know who became vice president after him. It was David Giles, Skeletor himself. According to Neil Hall’s book Hell to Pay, Giles was the Hells Angel implicated in the Western wind bust where 2 and ½ tons of cocaine were seized. Neil Hall used to be a reporter for the Vancouver Sun and covered the E Pandora trial. He heard all the wiretap evidence in court. That was the case where Richard the crook Barszczewski got him off. Looks like the Hobo Clown is toast now finally.

Posted by Dennis Watson at 3:46 AM