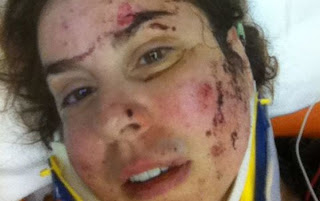 This just in. A blog reader sent this story in which really enforces the desperate situation the RCMP is in across the country and how our civil liberties are consistently under attack. This one is again from Alberta. Camrose just south east of Edmonton.

Global news is reporting that Simona Tibu claims she was seriously assaulted by a sheriff in a road side stop. At least he didn’t shoot her dead this time or in the leg like they did the guy from the man tracker show.

She claims he was banging on her window and demanded to see her license and registration. She claims she said you can see them as soon as you stop banging on my window and if you don’t stop I’m going to film you on my cell phone. She then claims he became more enraged smashed the cell phone and then extensively assaulted her.

To her amazement when the RCMP officer showed up he said she was going to be charged with resisting arrest. Just like Rodney King. This has been a horrible week for police brutality in Alberta. It stains all of us because law enforcement is so important.

This sheriff needs to be sued civilly and charged criminally then if found guilty in a court of law not in a rogue RCMP officers opinion, he needs to be fired. This isn’t some wild crack head. This is a doctor. It's not just his word against hers. She has injuries that were not self inflicted. Resisting arrest for speeding doesn't make sense. He destroyed the evidence by smashing her cell phone. She didn't smash her own cell phone.

Right now we have a serious problem with police misconduct and police brutality that is a direct violation of the Charter of Rights. Once again the arrogance of the department shows they must be sued in court before they will even think about addressing the problem just like in the class action sexual harassment suit despite the many proven allegations. Rage and denial is all we’re getting from the federal government. That needs to change. In more ways than one. Through the democratic process and through the courts of law because like it or not the Charter of Rights is real. If police want to enforce the law they must be bound by it.

Clearly police misconduct does not make criminal behavior acceptable. It does not condone selling crack or stealing cars and we are to applaud the hard work of the good cops out there like the EDGE unit and the CFSEU that are really making a difference despite the shameful conduct of their coworkers. We do have lots of gang news to come.

This case really infuriates me. Even though it appears in Alberta sheriffs have been given jurisdiction for traffic offenses, this guy is a woman beater. Those injuries do not constitute reasonable force. He is a piece of garbage.

Here’s another one from the States. US cops laughing after tasering a kid for doing graffiti and killing him. Back in Alberta we have another case of a deaf mute in Red Dear suing a sheriff after he jumped him for signing he couldn’t understand his command.

In Winnipeg two former Manitoba sheriff's officers are facing another round of sex-related charges. These arrogant violations of civil liberty need to stop. I never made a big deal about the taser incident at the airport because everyone knows they made a mistake and lied to cover their ass. Yet all these new cases show how out of control police accountability really is.