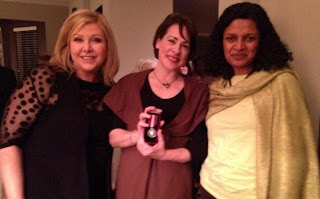 A blog reader recently sent me this picture of Catherine Galliford receiving a medal of courage on February 22 2013. Ironically it was recently reported that the RCMP are now trying to fire her and all the other women who have joined the class action sexual harassment law suit. Some things will never change. So it seems.

The multitude of allegations in the law suit are outrageous. What was supposed to have been a professional organization has clearly been anything but. Stephen Harper is not the one to deal with this issue. He fires and slanders whistle blowers and he is doing the same thing here.

It was a public outrage how the government responded to the sexual harassment law suit with denial and slander. It shows they have no desire to take responsibility and correct the problem. The fact that Don Ray and Jim Brown are still employed with the RCMP is proof of that. That is why a law suit was necessary. Because they have and are still refusing to admit there is a problem and are still refusing to deal with it despite their false claims. It is discouraging to say the least. We don’t restore public confidence after it has been lost with denial and continued bullying.