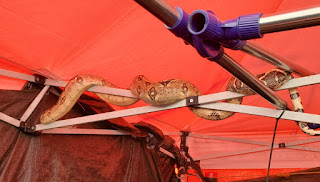 The Vancouver Sun is reporting that "Vancouver Police found themselves face to face with a nearly three-metre boa constrictor while breaking up a machete fight in the Downtown Eastside Wednesday . According to Const. Tania Visintin, officers responded to reports of a man with a machete in Oppenheimer Park around 12:30 p.m. One person suffered minor injuries in the incident, and one individual is in custody. While investigating, police entered a tent and found four replica handguns, two shotguns, two machetes, an axe, a wooden club with nails, and the large boa constrictor, said Visintin." Welfare Wednesday. Your tax dollars hard at work.

Oppenheimer Park is a toilet waiting to be flushed. Disband the rape camp.