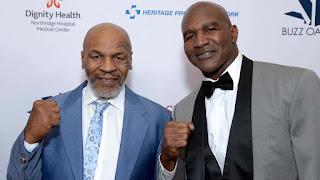 We had heard Mike Tyson was coming back for a couple of exhibition bouts. Mike Tyson is a well respected legend. Tyson Fury who was named after Mike Tyson has also earned our respect. Evander Holyfield has class and competence. A charity bout is a great idea.