CBC is reporting that "Although social media giants such as Facebook and YouTube have largely removed a debunked documentary about the COVID-19 pandemic from their platforms, copies and variations of the video are still up on alternative social media sites where hundreds of thousands of people are watching them." The problem is that Youtube and Facebook promote fake news as real and real news as fake. CBC has joined the MSM by claiming the video was debunked. That simply means the MSM opposes it which is why people want to watch it.

Natural News is reporting that "Facebook is trying to intimidate Brighteon.com into censoring the Plandemic video from its platform, and as part of the intimidation by Facebook, they’ve banned the sharing of all links from Brighteon.com (and NaturalNews.com), including in private Facebook messaging. For our part, we are doubling down on free speech and the Brighteon platform, reassuring our users that we will NOT comply with the censorship demands of the evil, communist China-run tech giants like Facebook, YouTube and Twitter." 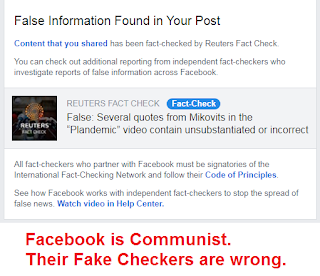