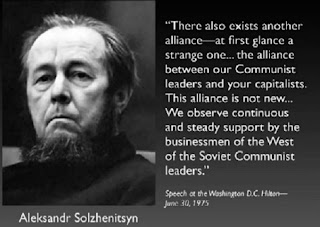 I find Harper's name calling and the name calling of Gwyn Morgan, his Pee Wee Herman advisor somewhat ironic. It seems so much like the born again paid minister who passionately denounces homosexuality then gets caught with a gay prostitute. Harper said anyone who didn't vote for him were Socialists or Separatists. His Pee Wee Herman Corporate advisor claims that the Occupy movement will leave everyone poor because they are Communists trying to achieve a redistribution of wealth. Will the real Communist please sit down.

Setting the name calling and the propaganda aside, we need to look at historical facts. The fact is, Big Corporations and Big Banks funded the Communist Revolution. The Rothschilds funded Karl Marx.

"Probably no name symbolized capitalism more than Rockefeller. Yet that family has for decades supplied trade and credit to Communist nations. After the Bolsheviks took power, the Rockefellers' Standard Oil of New Jersey bought up Russian oil fields, while Standard Oil of New York built the soviets a refiner and made an arrangement to market their oil in Europe. During the 1920's the Rockefellers' Chase Bank helped found the American-Russian Chamber of Commerce, and was involved in financing Soviet raw material exports and selling Soviet bonds in the U.S."

Before Winston Churchill became Prime Minister of Great Britain, he acknowledged a conscious effort of wealthy people to install a communist dictatorship in Russia.

"The Bolsheviks were not a visible political force at the time the Czar abdicated," Allen wrote. "And they came to power not because of the downtrodden masses of Russia called them back, but because very powerful men in Europe and the United States sent them in. "They [Lenin and Trotsky] joined up, and, by November, though bribery, cunning, brutality and deception, they were able (not to bring the masses rallying to their cause, but) to hire enough thugs and make enough deals to impose out of the gun barrel what Lenin called 'all power to the Soviets.'"

According to Senator Barry Goldwater, Chase Manhattan built a truck factory in Russia which could also be used to produce armored vehicles such as tanks and even rocket launchers. Perloff echoed, "American technology helped the Soviets construct the $5 billion Kama River truck factory ... [which was] successfully converted by the Kremlin to military purposes."

Wall Street continued to aid the Russian communists as they supplied the Vietnamese communists that Americans were fighting in Vietnam, says Allen. In the late 60s Rockefeller and other industrialists built synthetic rubber plants and an aluminum factory totaling about 250 million dollars. Professor Sutton observed, "these American capitalists were willing to finance and subsidize the Soviet Union while the Vietnam War was underway, knowing that the Soviets were supplying the other side."

An article appeared in the New York Times on January 16, 1967, which carried the headline, Eaton Joins Rockefellers to Spur Trade with Reds. Perloff summed up the story, "The ensuing story noted that the Rockefellers were teaming up with tycoon Cyrus Eaton, Jr., who was financing for the Soviet block the construction of a $50 million aluminum plant and rubber plants valued at over $200 million." He added, "The Chase, which maintains a branch office at 1 Karl Marx Square in Moscow, has gained notoriety for financing projects behind the Iron Curtain." Professor Sutton, Wall Street and the Bolshevik Revolution

It doesn't take much digging to find that Wall Street, Big Corporations and the big Banks funded hard line Communism so the wealthy could continue to oppress the working class. This is Harper's Communism. Paying lip service to small business but abandoning small business in favor of large corporations. Getting rid of the Wheat Bord was to help muscle out the small private farmer and aid the large corporate monopolies.

Gwyn Morgan and Stephen Harper like to do a lot of name calling, trash talking and pointing the finger but the truth is, they are the Leninists not the people who pay taxes, care about the environment, support individual rights and freedoms and oppose trade agreements that erode national sovereignty. Throwing away the Bill of Rights is the final step. 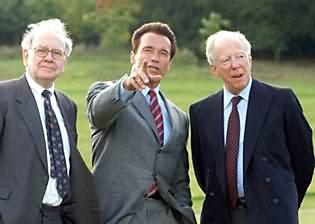