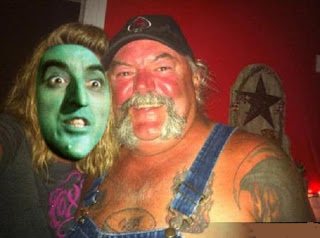 Speaking of Hells Angels and Pagans in New Brunswick, here's a guy called Teddy who one source states he claims he's with the Hells Angels and brags about getting Bacchus their 1% status. I'm not really sure that's something to brag about since Bacchus are the patron saints of homosexuality and their nose is so brown they have to wear a condom on it but to each their own.

Personally I think he looks like Santa with that red nose and rosy cheeks. Then again judging by the company he keeps that might just be the alcohol. The source claims Fred is friends with Roy Achy Breaky Gallant who seems to be involved with the Anarchy bikers baseball team. He was asking so many questions all the locals thought he was an under cover cop until he claimed to be with the Hells Angels. The source claims he's from Hamilton and isn't local. Perhaps he should stay home and lay off the sauce. What can ya do with a drunken santa?