Then what shall we die for? 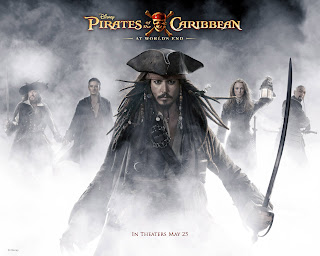 Alright you 666 scaly wags on either side of the bench, enough of the candy ass Christmas flower power. Back to your battle stations solders, this be a war. It's a war over the hearts of the children of men so it is. What grown man would call himself a follower of 666? Even Vincent Price knows that's the number of the beast and even he knows that his time is short. There is no L&R on that side of the battlefield. Mark my word.

A big shout out to the brothers and sisters on the east coast - New Brunswick and Nova Scotia. Where the MC rides free and the devil is trying to oppress the free rider by claiming everyone who rides must approve their patch through the 666. Bullshit I say brethren. The seas be ours and by the powers where we will, we'll roam.

The Boxing Day message is a call to arms for the New Year and a tribute to the Pirates of the Caribbean At World's End. In the opening scene of that movie, England makes an oppressive decree:

"In order to affect a timely halt to deteriorating conditions and to ensure the common good, a state of emergency is declared for these territories by decree of Lord Cutler Beckett, duly appointed representative of His Majesty, the king. By decree, according to martial law, the following statutes are temporarily amended:

We have enemies on both sides of the line so we do. We have enemies from outside and enemies from within. Organized crime and corrupt politicians consumed with greed. Greed fuels the 666 not loyalty or honour. Far from it. It's not just about making money. It's about making more and more money while oppressing others and betraying their own to satisfy their colossal greed. Whether it be David Giles making $30,000.00 in a few months through Dave Revell or Goldman Sachs aiding and abetting the investment fraud that caused the Greek Financial crisis, it is clear we are living in troubled times clouded by lies and cons.

Then of course at the darkest hour in the movie we have Keira Knightley's Braveheart speech asking the brethren "Then what shall we die for? The Brethren will still be looking here to us, to the Black Pearl, to lead. And what will they see? Frightened bilge rats aboard a derelict ship? No.

No, they will see free men and freedom! And what the enemy will see is the flash of our cannons. They will hear the ring of our swords, and they will know what we can do. By the sweat of our brows, and the strength of our backs...and the courage of our hearts. Gentlemen... hoist the colors. Hoist the colors!"

On that note someone recently sent me a moving quote from Martin Luther King. For some bizarre reason they claimed it was cited by the defense in Paxton's torture trial which would make it highly inappropriate in that context. Yet in the context of fighting the abuse organized crime inflicts on the public it is highly appropriate.

Well, you may go on and live until you are 90, but you’re just as dead at 38 as you would be at 90. And the cessation of breathing in your life is but the belated announcement of an earlier death of the spirit.” Martin Luther King Jr. Indeed, all of us die. Some of us are already dead before we go to the grave. Remember Brittney Irving this year and rat out the real rats.