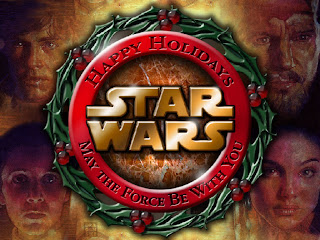 Obviously it's a story about good and evil, Jedi and Sith. Do you remember the first episode? Star Wars a New Hope? The main characters were introduced at a time when an evil empire had taken over the galaxy and the fractured rebels who were trying to restore a free republic were in hiding facing extermination from the evil empire.

The first three episodes in that trilogy showed how a handful of rebels were able to finally defeat an evil empire and restore democracy to the galaxy. Yet the focus of my Christmas message is on the second trilogy that came out after the first but was written before the first trilogy. It set the stage and showed how the evil empire was able to destroy a free republic and take over the galaxy in the first place. That fictional pattern is worth studying.

It all began in a land far far away on a peaceful planet called Naboo. Queen Amidala ruled the planet when it was under attack by a military blockade and invasion. Senator Palpatine helped her get support from the Senate to repel the attack. Only it turns out that Senator Palpatine was a bad guy. He was really behind the attack and invasion and used it to gain sympathy in the Senate to be elected Chancellor, the one in charge of the senate.

George Lucas' use of the term chancellor is somewhat ironic since it did have a historical significance. Adolf Hitler burned down the German Parliament building and blamed it on terrorists to gain support in parliament to become Chancellor and be granted special powers to deal with terrorists. Ironic George Lucas chose the term chancellor for Senator Palpatine's new position and ironic the clone soldiers became known as Storm Troopers. That is what Hitler called his SS.

Senator Palpatine was a political con man who tricked the senate through a false flag attack to become a dictator which destroyed the free republic and established a galactic empire.

Operation Northwoods was a historical fact. Before there can be peace on earth we need to address that. The UnPatriot Act was bad enough. The National Defense Authorization Act is far worse.

Insider Trading in Congress still goes on. Newt Gingrich reportedly received $1.8 million in consulting fees from Freddie Mac before it was bailed out by taxpayers.

Stephen Harper and Christy Clark's Corporate Communism is enslaving our liberty as we speak. What they are doing is way worse than anything the NDP has ever done. Their pork barrel politics is reminiscent of Brian Mulroney. This Christmas let's light a candle for Jack Layton and shed some light on the massive BC Hydro fraud Christy Crunch's liberals created. Stopping the smart meters is one thing, stopping the ballooning hydro debt created by fraud is another.