Raynald Desjardins charged with the murder of Mafiaso Salvatore Montagna 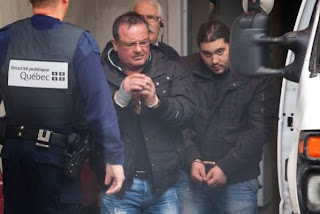 Raynald Desjardins, of Laval, is expected to be charged with five others with first-degree murder in the shooting death of Salvatore Montagna. Desjardins served 10 years of a 15-year prison term, from 1993 to 2004, for conspiring with the Hells Angels to smuggle more than 5,000 kilograms of cocaine into Canada.

Those arrested in Montagna's murder included senior figures in the Montreal mafia - as well as those with links to the Hells Angels, the outlaw biker gang that is heavily involved in organized crime and drug trafficking in Quebec, sources told the New York Post.

Remember the Death Riders take over in Laval? May 4, 1987 the President of the Death Riders, Martin Huneault, was shot to death in a Laval bar. No one was ever arrested for the murder, but just hours after Huneault's funeral, Death Riders Mario Martin and André Richard were seen meeting with Hells Angels Maurice "Mom" Boucher and Normand "Biff" Hamel. Boucher and Hamel received their colours after the incident and Huneault's murder allowed the Hells Angels to completely take over drug trafficking in Laval and the lower Laurentians area.

Posted by Dennis Watson at 9:37 PM