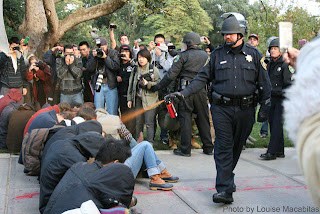 Well this isn't very Christmasy but someone just sent me the link and I find it very disturbing. Perhaps it is a sign of the times. It does indirectly tie in with the Christmas message. It's a video of peaceful protesters being pepper sprayed by police at the University of California in Davis.

I cannot articulate how outraged I am. Then a right wing spin doctor media outlet had the audacity to claim the protesters were willing participants in being pepper sprayed. They were holding a sit in. They were sitting peacefully side by side in a political protest that clearly had merit. They didn't "want" to be pepper sprayed. You see one girl in particular on the right bow her head and cringe in anticipation of the pepper spray. This was clearly a misuse of the weapon. This graphic talks about how much more dangerous police pepper spray is compared to civilian DOG spray. Let's not forget the 84 year old woman the police pepper sprayed in Seattle exercising her right to lawful assembly.

They were told if you don't move we will pepper spray you. Their refusal to move was not an invitation to be pepper sprayed. It was a claim to their unalienable right to free speech and lawful assembly. Normally in sit ins police will physically pick up a protester and arrest them. The protester doesn't resit nor aide the arrest. It is a nonviolent symbolic gesture.

Martin Luther King was a man I greatly respect. Aside from being a great orator, he was a powerful activist. He walked the walk he didn't just talk the talk. He was also the champion of nonviolent civil disobedience. He did not make a public appeal for anarchy. He said when you are committing an act of civil disobedience, you break the unjust law but are willing to face the consequence of breaking that unjust law in an attempt to correct that unjust law.

Pepper spraying nonviolent protesters with such a casual disregard for the Bill of Rights is shameful and embarrassing. It diminishes all of us. It reinstills public concerns about the National Defense Authorization Act. Setting up military checkpoints on American soil with no regard for the Bill of Rights or due process is definitely something out of Star Wars alright. 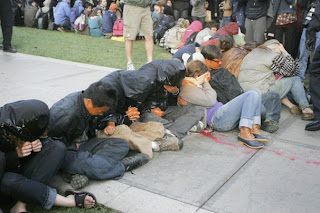