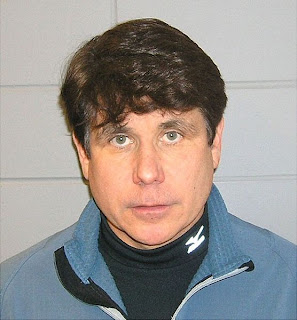 Now this guy really looks like Austin Powers. Ousted Illinois governor Rod Blagojevich was sentenced to 14 years in prison Wednesday for trying to auction off President Barack Obama's vacated Senate seat and a host of other corruption charges.

The Democratic governor was arrested in the midst of what prosecutors called a "political corruption crime spree" just weeks after Obama's November 2008 election. Blagojevich was convicted of 17 corruption counts in June after his first trial resulted in a hung jury on all but one of the charges.

Five of the past nine Illinois governors have been indicted or arrested for fraud or bribery. Blagojevich's predecessor, Republican George Ryan, is currently serving a six-and-a-half year jail term for fraud and racketeering.

Five of the past nine Illinois governors have been indicted or arrested for fraud or bribery. That is astounding. Here's a governor who gets caught trying to auction off a senate seat and gets convicted of 17 corruption counts. He's a Democrat. Usually we associate fraud and corruption with the Republican party but we have to open our eyes and see that it clearly affects both parties.

I want to know about Senator Dodd. Michael Moore highlights senator Dodd's involvement with mortgage fraud and he's told to cool it. What about the governor of New York? He's a Democrat. Catherine Austin Fitts claimed that under Andrew Cuomo's leadership "HUD was Being Run as a Criminal Enterprise."

The Coumotarp blog refers to Andrew Cuomo's Predatory Heart Of Darkness and claims: "As Secretary of HUD, Andrew Cuomo reversed the policy of selling defaulted mortgages so that families could keep their homes. Instead, he chose to foreclose on mortgages, which meant that families lost their homes and insiders cleaned up on fire-sale priced properties. The US Treasury also lost billions."

Retired US Navy Intelligence officer Al Martin claims Andrew Cuomo was involved with the National Heritage scam. Martin claims "Andrew Cuomo, through his father Mario's influence, was hired on as a consultant to the corporation. He was also a member of the Board of Trustees of Heritage Life at $50,000 per year. When Andrew became Director of HUD, Andrew helped cover up Heritage's scams vis-a-vis HUD. Heritage in turn not only buys up HUD property, but it also becomes its own insurer of HUD property. For example, it would claim that the insurance premium on XYZ property was $1 million a year, when in fact the insurance was only $100,000 a year."