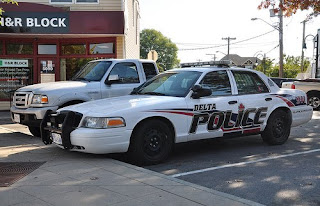 Just after 8 p.m. Tuesday night a Mercedes SUV with two male occupants in their 20s was sprayed with several bullets as it drove down the 9200-block of 114th Street by unknown suspects in a red sports car.

Of the two shot at, one is known to police and has gang affiliations Delta police said. "At this point, we're not going to reveal who they are," said Delta police spokesman Const. Ciaran Feenan. “This was a targeted shooting, There is no concern for the public’s safety.” He means he has no concern for the public's safety. This is outrageous. We have made zero progress since the Surrey Six murder.

Eileen Mohan is a much better person than I am. She was the one that made a public appeal for a web site to identify known gang members. She said they were living next door to gang members and did not know it. Had they know, their wonderful son might still be alive. The Abbotsford police department promised us a web site identifying known gang members but they never did it. No one else has bothered.

Now we go to the other extreme where the police knowingly withhold information from the public. They know which gang one of the two in the SUV that was shot at is, but they are refusing to let the public know because they clearly don't give a fuck about public safety. Someone in a red sports car fired several shots at a SUV and somehow that doesn't jeopardize public safety. That is really offensive.