Women not Wanted in the RCMP 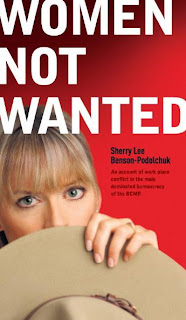 After my "get to the point" post about the latest RCMP harassment charges by a female officer in Surrey, one reader sent me a link to another case involving Sherry Benson-Podolchuk who wrote a book about her experiences in the RCMP entitled Women not Wanted.

I'll admit the situation is out of control. Bob Paulson has his hands full in turning the tide of arrogance and abuse within the force. He now claims women should have a greater role in RCMP leadership. True but just not any women. Women who are competent at the job. No doubt there are many. We just don't need the status quoe to recruit a handful of women to do their dirty work for them like Barbara George did.

Someone else sent in an article about two Manitoba Mounties convicted of beating a handcuffed prisoner. They illegally arresting an innocent man, beat him and then jointly tried to make him look bad in police reports.

This is another example of why the charter of Rights is so important and why the new US National Defense Authorization Act is so bad. In a free society, you need to be charged with a crime before being arrested. You are entitled to speak with a lawyer and have the right to a fair trial. The NDAA removes those requirements and lets the military arrest whoever they want, whenever they want and do whatever they want with them. If that act was passed in Canada, these two Mounties could not have been charged.

It appears that in the Manitoba case, pride was the root of the problem. Schulman convicted the officers of assault in September. He said the two officers “exaggerated” Papineau’s actions in their police notes and reports, not knowing the assault was captured on a security video.

They were outside a Grand Beach bar. The suspect complied and gave the police his id. The suspect admitted to snatching it back from the officer when he was done and started walking back to the bar. The officer then tackled him from behind, arrested him without charge, beat him while handcuffed and held him over night. The guy snatched back his id and the p=officers ego was bruised so he over compensated.

Again I'm going to say to fix the problem we need to begin at the beginning. We need to change Depot. We don't need to make it any easier. We just need to clean it up and get rid of the abuse. Sure officers face abuse on the streets. That doesn't mean they need to face it in the office as well. We need to empower officers to withstand abuse by building their self esteem not by teaching them abuse is acceptable and you need to abuse new recruits to teach them a lesson.

Recently, Ian Atkins, a retired superintendent was on The Fifth Estate and interviewed about a RCMP officer accused of assaulting and sexually harassing four female colleagues in the late 1990s. The female victims were also on the televised episode.

Posted by Dennis Watson at 7:39 AM