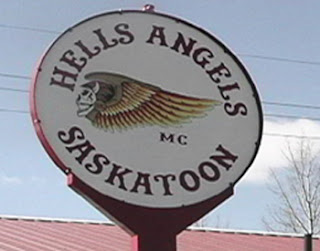 Hana was chased down and shot in the middle of Preston Avenue one night in April 2004, in what police at the time described as a contract killing. At the time of his death, Hana was out on bail, waiting to stand trial for selling cocaine, ecstasy and steroids, CBC News has learned.

Police allege that Tingle and Yakimchuk, both of whom are from Saskatchewan, were living in Calgary when they were ordered to come back and kill Hana. At Hana's funeral, local members of the Hells Angels came wearing their full colours to pay their respects.

Sources told CBC News that Hana was caught up in a drug turf war that featured the Hells Angels, the Terror Squad, and an Asian gang from Calgary that was trying to establish a presence in Saskatoon. Yakimchuk and Tingle were hired by the Asian gang to kill Hana, according to the sources.

Possible but how many times have the Hells Angels shown up at a funeral they were the prime suspects in contracting the murder? Rusty Hall is one that comes to mind. Duane Meyer is another. Either way, the whole point is Isho Hana was a cocaine dealer. Hells Angels attended his funeral. He was shot dead by rival drug dealers in a drug turf war in Saskatoon that involved the Hells Angels and some rivals.

It is clear that the Hells Angels primary business is not riding motorcycles. It is drug trafficking and using violence to maintain a control on the drug trade.