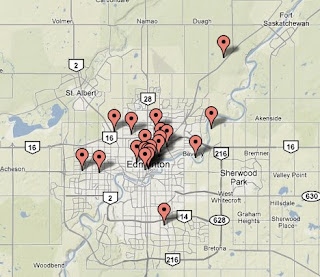 Another gun related murder in Edmonton Wednesday night. This surpasses Edmonton's record for the most murders in one year. An awful lot of them are gun related. Hard to believe they're not related to the drug trade that the Hells angels there clearly control. Almost half are young men. There was also that RCMP officer accused of shooting to death his wife at their Edmonton home.

This in addition to the two shootings in 24 hours in Vancouver. One of which was another mother executed in her car with her toddler in the Back Seat. Sounds like something the Bacon brothers did in Surrey a while back. This is outrageous.