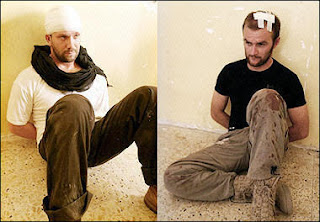 Two suspicious bombings in Afghanistan don't fit the norm. It's the first time a religious sect has been targeted on a religious holiday. The Taliban denied responsibility for the "inhumane" attacks in Kabul and Mazar, blaming "the invading enemy" - an apparent reference to the 140,000-strong foreign force in Afghanistan.

The NATO-led International Security Assistance Force declined to address that claim directly but its commander, U.S. Gen. John Allen, condemned the blasts as "an attack against Islam itself."

We remember Karzai. He's the one who said an opium drug raid was a violation of Afghanistan's sovereignty. Karzai's brother, Ahmed Wali, is a suspected player in the county's once again booming opium trade and is said to be on the CIA payroll according to the New York Times. Fahrenheit 911 claimed Karzai used to work as a consultant for Unicol but he denies that.

Karzai is a former associate of the Inter-Services Intelligence (ISI) and worked for the CIA during the Soviet invasion but so did the Taliban. Unicol didn't pull out of the oil pipeline by the way. They freaked after wining and dining the Taliban, the contract for the pipeline was given to Bridas an Argentina firm. After the invasion that decision was reversed.

These are important fact to remember when we ask ourselves what on earth were two MI 6 agents doing in Iraq with a car load of explosives dressed as Arabs? They exchanged fire with the Iraqi police the British and Americans had put in power and killed one. When interrogated they said they were on a secret mission and they had to ask their superiors if they wanted to know what their secret mission with a car load of explosives dressed as Arabs was all about. England ended up leveling the jail and breaking them out of prison instead of disclosing what that secret mission was.

There are a lot of strange things going on in Afghanistan and around the world. We need to remember that false flag attacks are very much a part of our history and we need to be weary of such. Hitler burned down the German Parliament and blamed it on terrorists to gain judicial powers as chancellor. Then he bombed a German radio station and blamed it on Poland to gain public support to invade Poland. Lest we forget.

We need to remember the CIA's close ties to the Pakistan intelligence. Let us remember that Raymond Davis wasn't just a CIA agent in Pakistan, who also worked for Xe, formerly known as Blackwater, he was the acting head of CIA in Pakistan.

A US intelligence agent arrested after shooting dead two men was the acting head of the CIA in Pakistan and had been gathering intelligence for drone attacks, according to intelligence sources. Raymond Davis, a 36-year-old former special forces soldier, had taken command after the CIA station chief's cover was blown, according to reports. American officials insist he is entitled to diplomatic immunity and that he be released when he was arrested last February. The fact that the remote splinter group claiming responsibility for the Afghanistan sectarian bombing comes from Pakistan is very suspect. Did they also work with Raymond Davis and the elusive but still involved Xe?