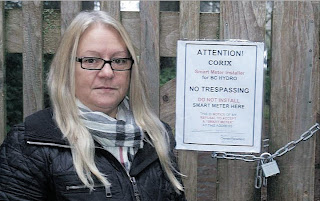 Saltspring Islanders are organizing to stop B.C. Hydro smart meters from being installed on their homes. One thing to look for in the New Year is the next campaign to oppose the not so Smart Meters that let Big Brother monitor everything you do and sell that information to whoever they want. Health concerns do exist but the huge concern is the over reaching breach of privacy and surveillance.

We also need to remember the insane cost of changing all the existing meters over instead of just using them in new construction units. We also need to remember the huge debt BC Hydro keeps deferring and how it got there. It got there because Christy Clark's Liberals privatized the companies that BC Hydro buys it's power from at inflated rates. The private companies are mandated to make a profit and are ripping us off. Thus creating yet another manufactured emergency with BC Hydro's artificially created ballooning debt. Power should be public.