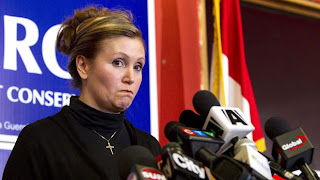 Yes Virginia, there is a Santa Clause. People are finally starting to see through Christy Clark and Stephen Harper finally gets sued for slander and bullying. Oh happy day. I'll admit the Helena Guergis case is a strange one. You have to wonder if it's not like Alfosno Gagliano suing the government for quoting the New York Times and claiming he was a made member of the Mafia in Montreal. Gagliano sued for defamation and lost because there was enough evidence to substantiate the government's claims.

Not like Brian Mulroney who lied in a court application and sued the government for claiming he received a kickback in Airbus. That matter never went to court because the government payed him a $2.1 million settlement. Then of course it turned out he totally lied about his business relationship with Karlheinz Schreiber and thus defrauded the Canadian taxpayer out of $2.1 million.

Helena Guergis' allegations were much more personal and extreme. Her husband had an impaired driving charge just like Gordon Campbell and Rob Ford. Only his DUI included a cocaine possession charge which was dropped by the crown because they said it was difficult to prove. Which of course opens the door wide open to where the speculation came from. We know the Harper government slandered her greatly. There was talk of her doing a line of cocaine off a prostitute's stomach in a wild threesome with her husband. Those kind of allegations, if true clearly make you want to stand back a bit. Yet if they were false, wow. Harper does have a habit of firing and slandering whistle blowers.