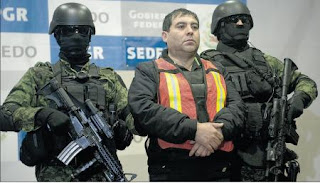 On Monday, masked Mexican soldiers presented Felipe Cabrera, known as "el Inge", to the media after his capture in Culiacan, capital of Sinaloa, the north-western Pacific state after which the drug cartel is named.

Cabrera was the second suspected lieutenant of Joaquin "Shorty" Guzman, boss of the powerful Sinaloa cartel to be seized there in the past two months. Were they really lieutenants? I hope so. I can't help be cynical knowing that the ATF and other "Agencies" were caught supplying the Sinaloa drug cartel with guns and letting them smuggle tons of cocaine into the US in Operation Fast and Furious. Some of which must have ended up in Canada.