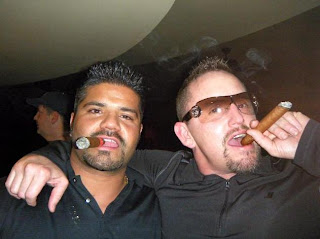 So I hear Joey Verma, the one who has been charged in Britney Irving's murder, is in KRCC for Christmas. I'm told that stands for Kamloops Regional Correctional Centre. Seemingly someone in that facility told someone who e-mailed me that Joey has the letters VP tattooed on his chest now and is recruiting for the Kingpin Crew in prison. Now this is obviously unconfirmed but it certainly is well worth investigating. After all, what would VP stand for other than Vice President? Why would he be recruiting for the Kingpin Crew if he was not affiliated with it?

Actually I find it rather disturbing. We know that Joey was affiliated with the Independent Soldiers. We were told he became affiliated with the Kingpin Crew at the time of Britney Irving's murder. This was not a hostile cross over because both groups are run by the Hells Angels just like the Crew and the Independent Soldiers in Prince George. We know Joey is still friends with Blaze who is out on bail for sexual assault. What a dysfunctional family. Even worse is bragging about betraying and murdering a good woman.