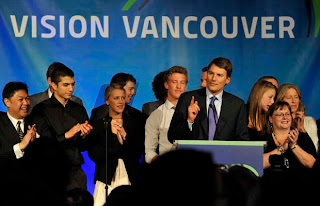 Here's the latest news. Front page of the Vancouver Province. Vancouver's Mayor, Gregor Robertson's foster son is facing firearm and cocaine charges. Seemingly the foster son was with them for two years and has been on his own since 2009. Although I most certainly am not saying Robertson is above reproach, anyone's son can get involved in the drug trade.

Yet I do think Saanich Police officer Dillon Sahota's son Paul Sahota and son in law Jarrod Nicol's involvement in the drug trade is very significant since Dillon Sahota owned one of the houses where drugs were seized and how that whole Victoria cocaine trade is tied to the BC Liberals through the Bassi Virk BC Rail scam.