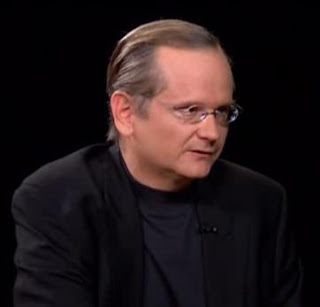 A blog reader recently sent me a few links to Lawrence Lessig and his book Republic, Lost: How Money Corrupts Congress - and a Plan to Stop It. In an interview with Charlie Rose he is asked: "That’s not a democracy in your judgment because the few are making the decisions because of the power of their money and influence."

Now, whatever that means, what we know is congress has evolved a different dependency; a dependency upon the funders and that dependency is different and conflicting with the dependency upon the people because the funders are a tiny slice of the people. If you ask who in 2010, what percentage of Americans maxed out in a contribution in a congressional campaign, the answer is .05%. So Occupy Wall Street says we’re the 99%, that’s bad marketing. They should be saying we’re the 99.95% who don’t have access and influence inside the system because we are not the .05% with the extraordinary power that funders within the system have."

Who is this guy? He even quotes the Federalist Papers. All of a sudden we have someone who makes sense. He's a professor of law at Harvard. Yet he's smart, he's not arrogant, and most importantly he makes a lot of sense. Turns out he has his own blog and has started and activist group called Rootstrikers which claims Wall Street should buy stocks not politicians. He even quotes Michael Geist. Three cheers!

Lawrence Lessig's point is how lobbyists can buy government. We clearly see the same thing happening within the Harper government. Lawrence Lessig has articulated the problem well which was also dramatized in Eddy Murphy's movie Distinguished Gentlemen. My focus's is how those bought votes are taking us away from democracy and how preserving the Constitution and the Bill of Rights is essential to preserving a democratic system.

I will add that the idea of the rich buying politicians is a scam in itself. Obviously the rich aren't going to share their wealth. I'm sure the banks didn't donate $75 billion to Harper's campaign even though he gave them that much of taxpayers money. For them it's a high yielding investment. Micheal Moore pointed out that by spending a few million dollars to buy Congress, Wall Street was given billions.

The key thing to remember is that it effects both political parties. Michael Moore was told to cool it when reporting about Senator Dodd yet he also reported stuff on Clinton.

Posted by Dennis Watson at 3:38 PM