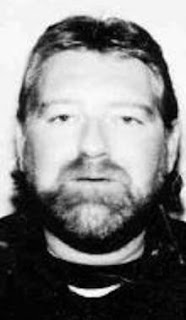 Normand "Biff" Hamel was a member of Maurice "Mom" Boucher's white supremest SS motorcycle gang until it disbanded in 1984. That's when he and his mommy became Hells Angels prospects. Biff was a prospect of the Laval chapter and was present when the Hells Angels murdered his "associates" in the Lexonville massacre.

Two years later the Hells Angels wanted to take over the Death Riders. The take over became absolute on May 4, 1987 when the President of the Death Riders, Martin Huneault, was shot to death in a Laval bar. No one was ever arrested for the murder, but just hours after Huneault's funeral, Death Riders Mario Martin and André Richard were seen meeting with Hells Angels Maurice "Mom" Boucher and Normand "Biff" Hamel. Boucher and Hamel received their colours after the incident and Huneault's murder allowed the Hells to completely take over drug trafficking in Laval and the lower Laurentians area.

It's hard to believe the Hells Angels have only been in Canada since 1977. It is clear that ever since that time their business has been taking over the drug trade with violence and deception. Betrayal is clearly their method of operation.

Biff Hammel was murdered by the Rock Machine on April 17, 2000. He remained a close friend and associate of Mom Boucher who also profited from the perpetual betrayal.

Interesting to note that Boucher's friend and Hells Angel hit man admitting to murdering former Hells Angel Andre Desjardins for the Hells Angels. How on earth Andre fell out of favor with the group is hard to tell but it was reported he met with Mom Bouicher the day before he was murdered. With friends like that, who needs enemies. They also beat his grandmother to death. No L & R there.

Kinda similar to how after "someone" burned a brother's tattoo shop in Prince George they burned down the home of his girlfriend's mother who was in the home at the time and was wheelchair bound. Not only do the Hells Angels have a history of betraying their own for greed, they have a history of murdering mothers, grandmothers and children too. Now you tell me, whow are the real rats?

Posted by Dennis Watson at 8:59 AM