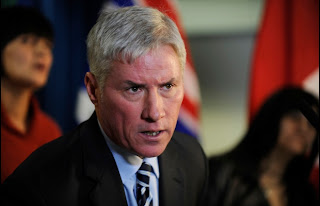 Compare that with the 600 liters of GHB or the 8 kilograms of cocaine that was seized involving David Giles who walked and the 52 kilograms of cocaine seized from Glen Hehn's storage locker who also walked. Not to mention the boat load of 2 1/2 tons of cocaine that belonged to the Hells Angels with no arrests made. One hand gun? Joseph Bruce Skreptak had more than that in his car. The police found a machine gun dumped in the Fraser River.

Who on earth is Insp. Mike Porteous? Surely he's not related to Hal Porteous. Don't get me wrong. The Sisters Watch phone line is a good thing: 604-215-4777

I am just very concerned about censoring the real issue and naming the real names. We all know who are supplying the drug dealers at the Carnegie Centre. Let's not sugar coat it by helping with their PR.

The other point I have is the police admission that these gangs are using extreme violence on the most vulnerable including torture. Just like the same group is torturing crack addicts for drug debts in Prince George.

The public rally claimed that Ashley Machiskinic's death was not a suicide. Activists claimed she was pushed out of a hotel window for a drug debt and that she wasn't the only one. It's all reminiscent of the Surrey House of Horrors.

When the public rallies to complain about the drug related violence against women in the DTES and when the police start holding press conferences about drug related violence and torture in East Van, then we know that is the tip of the iceberg and just scratches the surface. It will take a continued vigilant effort to really address the problem. Please proceed.

I am thrilled the police got that much date rape drug off the street. That was a substantial amount and getting any amount off the street is a good thing. Yet the purpose of the public relations press conference was to seemingly address the public's concerns that were expressed in the Town Hall meeting at the Carnegie centre and the public demonstrations after Ashley Machiskinic's death.

The public want the police to address the drug related violence against women in the DTES. Women are being push out of windows for drug debts. Let's face it. Date rape drug is something a man will buy to slip into a woman's drink. Date rape drug is not something a women gets addicted to then gets pushed out of a window for that drug debt.

Getting any amount of date rape drug off the street is a good thing. However, it does not address the problem it claims to be addressing. That is why the public trusts Jim Chu and why they don't trust the others. Perhaps the old boys club is trying to push Jim Chu to the side because they are afraid of the public backing he has.

Perhaps they don't want a civilian agency to monitor police complaints like Jim Chu suggested. Speaking of which, since the Abbotsford police have recommended charges being laid against the Kelowna police officer who was caught on video kicking a suspect in the face, has the Kelowna RCMP followed up on those charges yet or are they waiting for the public to forget about the incident? Kinda hard to do when more people keep coming forward.

Posted by Dennis Watson at 3:23 PM